At least she wasn’t lynched.

In a striking example of the mob mentality at work, a woman was recently chased from a supermarket in Staten Island, New York, because she wasn’t wearing a mask. A now-viral video (below) of the COVID-crazed patrons hurling profanities and screaming at the woman was posted to Twitter Sunday night after user “McAuley” found it on Reddit.

33.2K people are talking about this

Since April 17, an executive order signed by Governor Andrew Cuomo — who killed nursing-home residents by requiring that their facilities accept virus-positive patients — has compelled New Yorkers to wear masks in public in situations where social distancing is impossible. As a consequence, stores in the state require patrons to wear masks.

Social pressure may be the only way now the mask rule is enforced in New York City, however. For, after a 22-year-old mother was forcibly restrained by police and arrested (video below) on May 13, Mayor Bill de Blasio announced that authorities would no longer enforce the mask order in most situations.

Of course, the video above indicates that, once again, a statist politician (de Blasio) has thrown the police under the bus for enforcing rules he and his fellow travelers created/advocate. One may also wonder here when the worlds’ Andrew Cuomos will be arrested for their disastrous nursing-home policies (which smack of negligent manslaughter).

But our current situation is symbolically fascinating: In a time when Wuhan virus concerns are being used as a pretext to ban protests and censor dissenters on social media — to silence people — that muzzling is symbolized by having Americans wear masks covering their mouths.

This said, citizens can still often weigh in (unless their commentary is too powerful, popular, and politically incorrect; then it gets yanked), and leftists certainly did under the Twitter video, as the below selection evidences (hat tip: American Thinker).

My safety over your “freedom”

Cool. Finally. Cuz at this point, a maskless person in an indoor place is like a shooter pointing his gun at me.

It is clinical insanity. 100,000 people in the US have died from a deadly virus and the number keeps going up. All it takes to save lives is wearing a mask and keeping your distance. To be so self-centered that you can’t comply with 2 easy requirements is absolutely clinical.

Finally. The anti-maskers have been bullies & spreaders of the virus. Those of us wearing masks should not put up with them. They are wrong

Then, perhaps missing the irony that the Ku Klux Klan was a Democrat organization, one respondent posted the below: 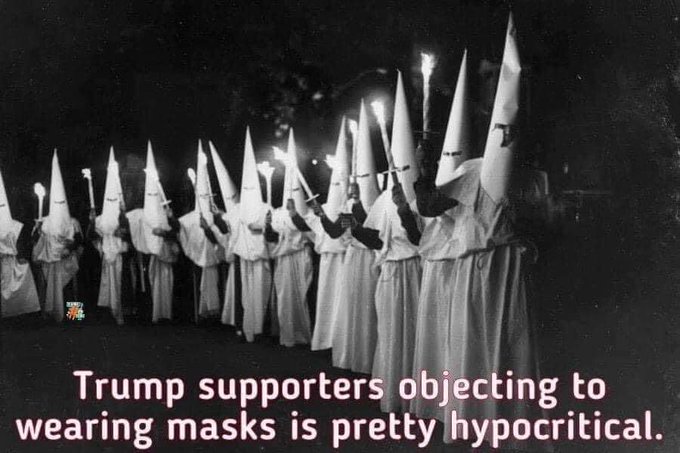 648 people are talking about this

(Given that a GQ political reporter recently misidentified in print infamous segregationist George Wallace as a Republican, it wouldn’t be surprising if the above respondent really didn’t know the KKK’s party passions.)

Interestingly, just as how the pandemic has caused leftists to have a newfound (provisional) appreciation for state’s powers (when resisting President Trump’s recommendation to “open” back up), American Thinker also points out (tweet below) that some have suddenly seen the value of freedom of association.

I am an American. I’m not forced to wear ANYTHING.
UNDERSTAND?

You’re not. The stores are also American and are not forced to accept customers in their doors that don’t follow their rules. Private businesses don’t have to cater to everyone. UNDERSTAND?

What principle! Except, it turns out that this respondent was against freedom of association before he was for it, as the 2017 tweet below, discovered by American Thinker, evidences.

Clearly his argument was for the wedding (he stated he woudl make them other things) , again, keep trying to move the goal posts, and keep failing

No, he did not say he would make them something else, he clearly said he would not participate in their wedding by making something directly for it. He offered to sell them generic things that were already made. He refused to make anything new for their wedding specifically.

But OG Sharpton has company changing with the wind. While many are running around like Chicken Little and going mask crazy, forgotten is that authorities haven’t always been crazy about masks. The World Health Organization stated in late March that there “is no specific evidence to suggest that the wearing of masks by the mass population has any potential benefit.”

The same month the CDC also recommended not donning a mask; four weeks later it was all for it. Dr. Anthony Fauci did the same about-face. First he downplayed masks’ effectiveness in early March (video below).

Then he changed his tune (video below) and even seemed to tacitly acknowledge that the earlier recommendation was a lie designed to ensure that medical workers would have masks available.

As the top commenter mockingly said under the first Fauci video, “Simon says……..put on a mask….Simon says……..take it off.” So what should we do?

The New American wrote last week that “not only can face masks be ineffective, they can help transmit the virus and worsen its effect.” So maybe a face mask is just like Linus’s security blanket — or maybe the jury is still out.

What I do know is that it’s ironic how leftists want all 331 million Americans masked — with exceptions made for the world’s General Flynns.

Selwyn Duke (@SelwynDuke) has written for The New American for more than a decade. He has also written for The Hill, Observer,The American Conservative, WorldNetDaily, American Thinker, and many other print and online publications. In addition, he has contributed to college textbooks published by Gale-Cengage Learning, has appeared on television, and is a frequent guest on radio.