Once again, America is funding its own adversaries.

Congressman Mike Waltz (R-Fla.), an Army Green Beret, said during an interview with Breitbart News this week that the U.S. military is funding China — including weapons production for the Chinese military — by placing some of troops’ retirement savings in an index that includes Chinese companies.

In a video he tweeted earlier this week, Waltz said that “billions of dollars” of the military’s 401(k)-style plan are “going over to Beijing and funding Chinese shipbuilding, plane building and all types of companies.”

“Many of which are close to the Chinese Communist Party, some of which are even on the U.S. sanctions lists,” he added.

The hard-earned retirement savings of our servicemembers are funding the #Chinese military RIGHT NOW.

We can’t let this continue. It’s time to #ProtectOurTSP! 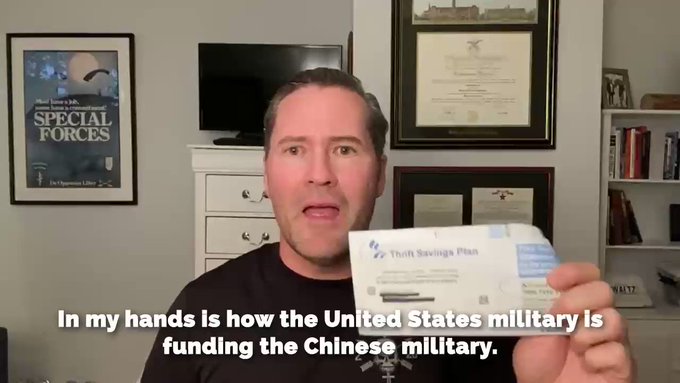 One of the companies on the index is Hangzhou Hikvision Digital Technology, which last year was placed on a trade blacklist for producing the surveillance technology used in detention camps for China’s Uygher Muslim minority population.

Another company, Aviation Industry Corporation of China, makes weapons for the Chinese military.

Waltz contended that the U.S. should treat China as it did the Soviet Union during the Cold War:

We cannot have the American military who’s out on the frontlines retirement account funding their biggest adversary in the 21st Century. America, we need to wake up. We are in a Cold War with China, they are certainly in one with us. And we would be no more funding their industry through our retirement than we would the Soviet Union and companies in Russia years ago. We need to think about this differently and this has got to stop.

“It’s insane,” he concluded. “This is the most dangerous adversary we have ever faced.”

In response, Waltz is sponsoring a bill in the House that would prevent the retirement funds in question from being invested in Chinese firms. The bill was first proposed by Representative Mark Meadows (R-N.C.), who now serves as President Trump’s chief of staff. Senator Marco Rubio (R-Fla.) is the sponsor of the companion bill in the Senate.

Waltz said the issue could also be addressed by President Trump appointing a new chairman of the Federal Retirement Thrift Investment Board (FRTIB), which has the responsibility of overseeing the federal retirement fund known as the Thrift Savings Plan (TSP).

The current chairman, Michael Kennedy, is an Obama appointee who last year overruled objections from both political parties to go forward with the decision to shift TSP’s international fund index to the MSCI All Country ex-U.S.A. Investable Market Index, which opened up investment in Chinese firms.

Senators Rubio and Jeanne Shaheen (D-N.H.) described the move as “a decision to invest in China-based companies, including many firms that are involved in the Chinese Government’s military, espionage, human rights abuses, and ‘Made in China 2025’ industrial policy.”

“Many of these Chinese companies may soon receive investments directly from the paychecks of members of the US Armed Services and other federal government employees because of your decision,” the senators wrote.

While supporters of the FRTIB decision say the board merely wants the best return on investment, Waltz argued that national security should come first.

“I’m a free-market, pro-growth capitalist all day long. But not at the expense of national security. And China fully intends — it’s explicit in President Xi’s and many other officials’ speeches — to dominate the United States in the next 15 years, and we need to start treating this like the cold war that it is,” he said.

The congressman blasted China policy under the Obama administration, which he said was led by the belief that “if we just extend our hand and open ourselves up, that they will, too.”

The coronavirus outbreak has brought heightened attention to China and its political and economic ascendance — seemingly at the expense of the United States.

Amid the pandemic, America and other Western nations have been dependent upon the communist regime for medical supplies (and even drones for surveilling citizens) due to having allowed their manufacturing to move to the Asian country.

Moreover, officials are becoming increasingly convinced that COVID-19 originated in a lab in Wuhan, China.

It should not be forgotten that that lab, the Wuhan Institute of Virology, received funding from the U.S. government. Add to that the fact that our government is enabling investment of service members’ retirement funds in Chinese firms.

Eventually, even the biggest skeptic must acknowledge that America’s penchant for aiding our supposed rival is uncanny.

Are they just foreign-policy blunders? Or a concerted effort by the globalist Deep State? After all, if these were just blunders by those in charge, you would expect them to once in a while make a blunder in our favor.

Luis Miguel is a marketer and writer whose journalistic endeavors shed light on the Deep State, the immigration crisis, and the enemies of freedom. Follow his exploits on Facebook, Twitter, Bitchute, and at luisantoniomiguel.com.