The George Floyd Lie: “The Issue Is Always the Revolution”

It’s amazing what can be accomplished in a lie’s name. As with the Reichstag fire, the George Floyd incident actually happened but has been portrayed as representing something it doesn’t: In reality, police are more likely to kill white than black suspects. Despite this, it’s being used as a pretext to tear down statues, cancel popular TV shows, defund police forces, stifle unfashionable opinion and, generally, further ravage our culture and institutions.

An SDS radical once wrote, “The issue is never the issue. The issue is always the revolution.” In our case, the issue is currently a “cultural revolution.” This term originated with China’s ’60s-born movement by that name, but has been a hallmark of left-wing movements since the Left was born. The French revolutionaries had their new calendar, with 1789 as its first year; while Cambodia’s Khmer Rouge had their “Year Zero,” as examples.

It isn’t just continuing, though — it’s accelerating. Consider that along with vandalized and destroyed Confederate monuments, a Christopher Columbus statue was beheaded in Boston (image below). 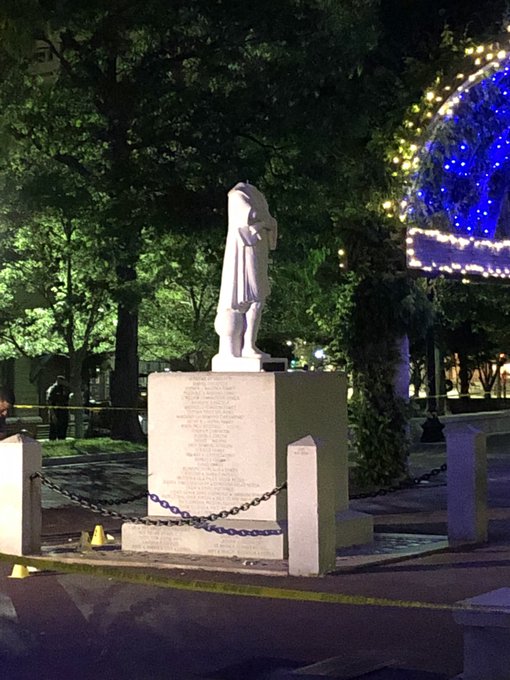 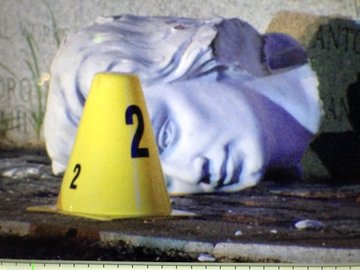 187 people are talking about this

Another was pulled from its pedestal in St. Paul, Minnesota (image below). 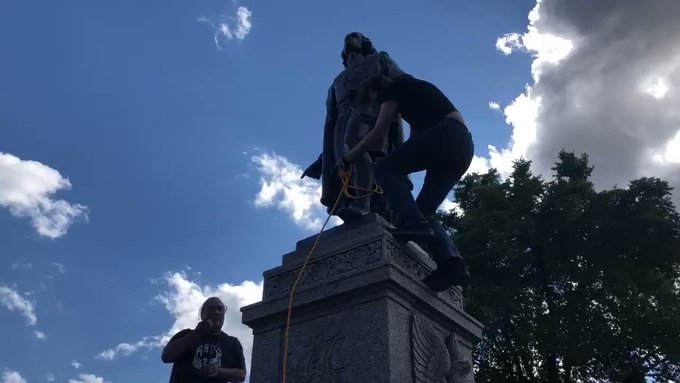 10.6K people are talking about this

Yet another was defaced with red paint in Miami (image below). 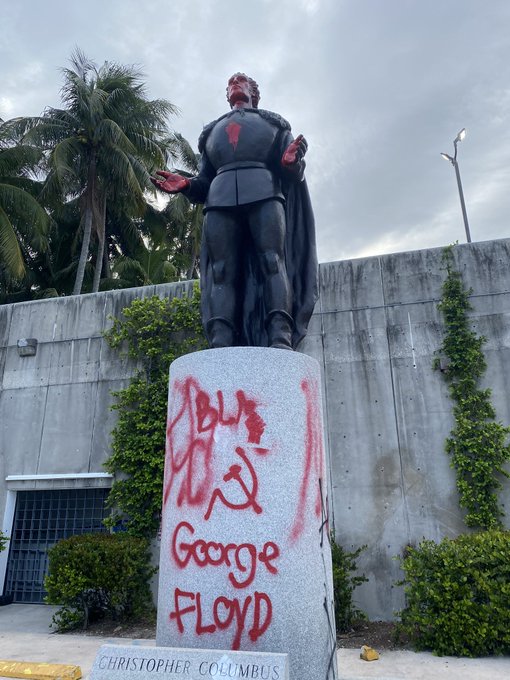 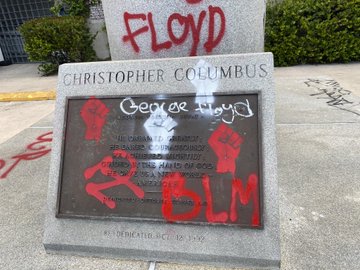 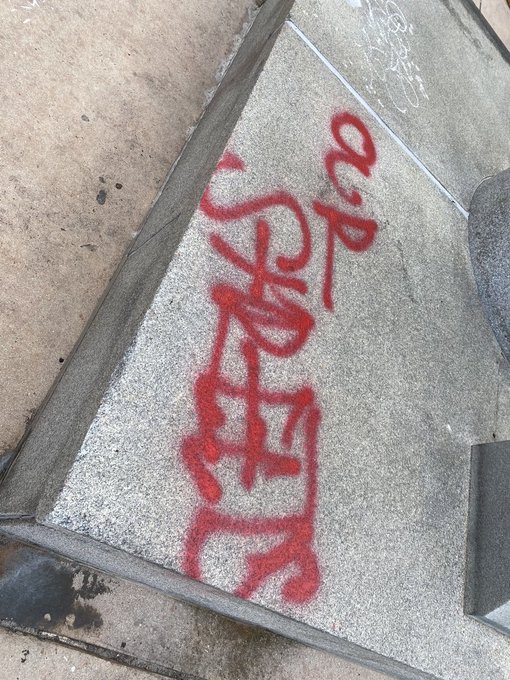 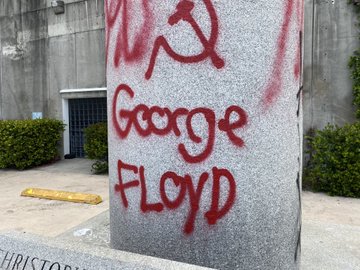 132 people are talking about this

Even worse, a Columbus statue was pulled down in Richmond, Virginia, set alight and then thrown into a lake (image below).

A Columbus statue in Richmond, Virginia was torn down last night and dragged into a nearby pond. Here’s the story from @ardzes at @myVPM: https://vpm.org/news/articles/14074/protesters-bring-down-columbus-statue-in-byrd-park-after-march …

Protesters Bring Down Columbus Statue in Byrd Park After March

The statue was torn down after protesters marched throughout the city to show support with the Black Lives Matter movement, and to highlight the injustices that indigenous populations have suffered…

See Daniel A. Guzman’s other Tweets

Of course, the destruction of statues has become a recurring theme in recent years, as we allow the most ignorant, morally corrupt, and historically illiterate among us to denude our cultural landscape. (I explained why Columbus should be honored in “Killing Columbus: Seeking the ‘Undiscovery’ of America.”)

A sane country would defend its cultural heritage from irrational mobs, but our cultural revolution can proceed unimpeded partially because it has the tacit support of many pseudo-elites. Exemplifying this mentality, House Speaker Nancy Pelosi sent a letter “Wednesday asking for the removal of 11 statues depicting Confederate soldiers and officials that are displayed as part of the National Statuary Hall Collection in the Capitol,” reported CNN.

Pelosi, who with other demagogues recently put on a phony display kneeling in “honor” of George Floyd while wearing colored shawls associated with Ghana (I’d had no idea Floyd was Ghanaian), had first made the request to remove the statues in 2017. Yet she has been in the House for 33 years now. What took her so long? If the statues’ presence really is wrong, did it take her until age 77 to realize this or muster up the courage to take action?

But things happen more quickly in the private sector, and this brings us to entertainment. On Tuesday, Paramount Network canceled its show Cops after 33 seasons, and A&E Network followed suit a day later with its Live PD. Now comes news that under attack is children’s cartoon Paw Patrol, which “is basically a pretense for placing household pets in a variety of cool trucks,” informs the New York Times.

The cartoon “team includes Marshall, a firefighting Dalmatian; Rubble, a bulldog construction worker; and Chase, a German shepherd who is also a cop,” the paper continues.

But last week, the show’s Twitter account asked for trouble by asking for feedback. “Commenters came after Chase,” the Times also tells us. “‘Euthanize the police dog,’ they said. ‘Defund the paw patrol.’ ‘All dogs go to heaven, except the class traitors in the Paw Patrol.’”

The campaign is one to banish “the good-cop archetype,” as the Times puts it. This reflects ignorance.

It’s ironic that the people who don’t want blacks or any other favored group stereotyped don’t mind stereotyping police negatively. Of course, some may say that the good-cop archetype is a positive stereotype, but complaining about this misses the point of art.

Juvenile attempts to dismantle the police aside, some kids will grow up and become cops, even if they’re cops by a different name. Consequently, presenting a police ideal is beneficial; it not only attracts more virtuous children to law enforcement, but provides proper role models to aspire to.

After all, if cops on TV are portrayed as bad, what kind of people will be more likely to enter the profession?

The point: Art exists not to degrade society, but to elevate it in some way. This is accomplished by, ideally, presenting heroes who embody all the virtues. (I examined this in-depth in “Where Have You Gone, George Washington? Killing Our Heroes.”)

Not only is virtue lacking today, but the least virtuous among us are the most influential. A small minority, they’re in the mobs denuding our cultural landscape and are the squeaky wheels, in social media and elsewhere, that get the grease.

And the silent majority gets the shaft — because it is silent. G.K. Chesterton wrote in 1911, “The true soldier fights not because he hates what is in front of him, but because he loves what is behind him.” The problem today is that the civilization destroyers hate what is in front of them more than everyone else loves what is behind him. So while the former may not be the truest soldiers, at least they’re fighting.

The Gospel of Socialism? Pope Francis Decries Tax Cuts for the Wealthy as Sinful