Study: Lockdowns Save NO Lives. Are Politicians Destroying the Economy for NOTHING?

Once the initial premise that Wuhan coronavirus patients would overwhelm the healthcare system without lockdowns in place collapsed, politicians moved on to justifying the measures based on saving lives overall — even though experts warn there’ll be a “second virus wave” regardless. But now even this claim is being refuted by a new study showing that there’s no evidence whatsoever that the lockdowns save lives.

The results? Given that these states are less populated and are more sparsely so than many locked down states, it’s not surprising they’ve “experienced substantially fewer cases and deaths than the lockdown states, even with New York out of the mix,” writes Reilly. (Note: His removal of New York, which he calls an “outlier” state, only improves the locked down states’ numbers.)

Yet the “free” states fared better even when adjusted for population. “Comparing the social-distancing states plus South Carolina [which didn’t adopt a shelter-in-place order until April 6 and still allows most religious services] to US states minus New York,” Reilly tells us, “the social-distancing states experienced 663 fewer cases per million and 42 fewer deaths per million on average than the lockdown states.”

Going further, Reilly then ran a “regression model” factoring in other variables: “population, population density, median income, median age, diversity (measured as the percentage of minorities in a population), and the state’s Covid-19 response strategy (0 = lockdown, 1 = social distancing),” as the professor related.

“The question the model set out to ask was whether lockdown states experience fewer Covid-19 cases and deaths than social-distancing states, adjusted for all of the above variables,” Reilly continued.

The only significant variable was population, with large, densely populated places being “more likely to struggle with Covid-19, no matter what response strategy they adopt,” Reilly points out (emphasis added).

Reilly found the same result when examining lockdowns’ effectiveness in Europe and Asia. Sweden, for example — which has been widely criticized for not locking down its population (tweet below showing “business as usual” in the nation) — “ranks 23rd in terms of cases per million and 10th in terms of deaths per million … in Europe as a whole,” writes the professor. 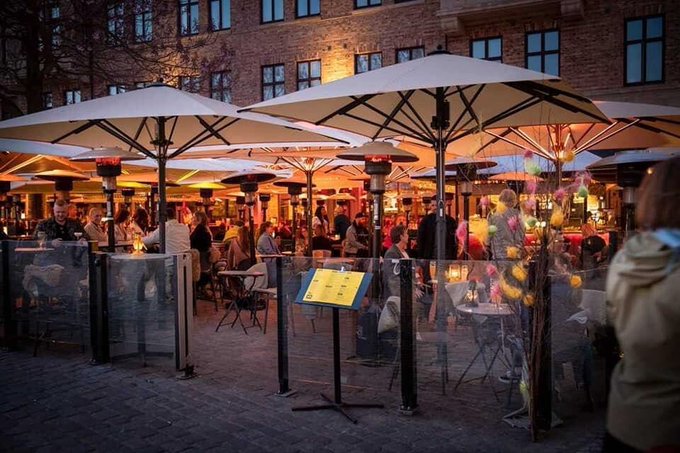 Social distancing is important, and crazy loose talk should be avoided…but it’s worth remembering HOW wrong the COVID models were (due to decreased lethality, etc.). This, from @theblogmire, is an exact mapping of Sweden’s actual death rate onto Imp-College’s predictions. 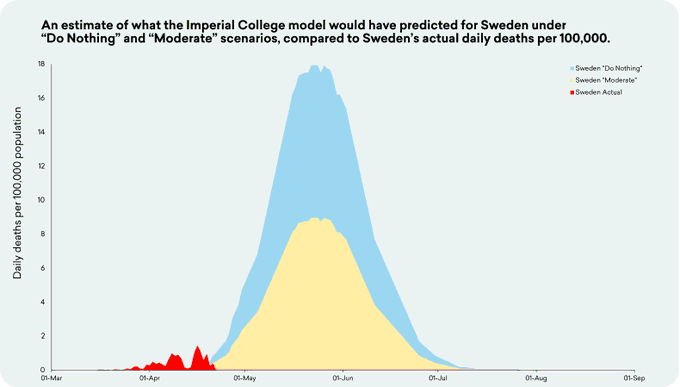 And below is a Wednesday evening Tucker Carlson Tonight segment that relates Reilly’s findings (and more).

• “The overwhelming majority of people do not have any significant risk of dying from COVID-19. The recent Stanford University antibody study now estimates that the fatality rate if infected is likely 0.1 to 0.2 percent.” This is similar to that of the flu. And remember the flu lockdowns? Yeah, neither do I.

• “People are dying because other medical care is not getting done due to hypothetical projections.”

• “We have a clearly defined population at risk who [sic] can be protected with targeted measures.”

In other words, there’s simply no evidence lockdowns save lives and some indication they cost lives. But there’s plenty of evidence they’re wreaking economic devastation, which, as I pointed out earlier this month, can lead to even more loss of life. For economic distress and poverty are associated with a host of negative health outcomes.

So any politician continuing the lockdown folly — which, mind you, has involved tyrannical measures — in the face of the above evidence is apparently choosing an all-risk-no-reward course. It is madness and malpractice.

Unfortunately, with the lockdowns polling well among Americans — thanks to a malpractice-ridden mainstream media — politicians have no incentive to respond to the science. Moreover, admitting they destroyed the economy for nothing could destroy their careers, giving them an incentive to rationalize away the facts, keep us in our hole, and continue digging. To use a variation on an Upton Sinclair line, “It is difficult to get a man to understand something when his whole career and future depend upon his not understanding it.”

But as our understanding increases, it’s becoming apparent that the lockdowns may end up being one of the worst blunders in American history.

Given this, and that the lockdowns may end up costing far more lives, it’s time to revisit the mid-March input of an MSNBC analyst (tweet below) who said that President Trump “may have criminal exposure for some level of negligent homicide” for his Wuhan virus response.

Hey All. Can we talk about 1 of the few topics I may actually know too much about: homicide? Specifically, whether Donald Trump may have criminal exposure for some level of negligent homicide or voluntary/involuntary manslaughter for the way he’s mishandled the Coronavirus crisis

Will he, or anyone, now ask the same about the governors choosing lockdowns over science?

Illinois Board of Elections: Yes, Noncitizen Immigrants Voted in 2018