The national press secretary for the now-suspended Bernie Sanders presidential campaign is openly speculating that the Democrat Party will replace presumptive nominee Joe Biden before the general election in November. Briahna Joy Gray, a journalist and political consultant, bashed Biden and the Democrat leadership in a tweet on Thursday.

Gray seemed to be citing Biden’s cognitive decline as the reason the Democrats may be looking to replace the former vice-president.

“Bernie was too kind to go after Biden, but it’s coming,” Gray wrote.

“Either Dem leadership cares more [about] maintaining a corporate status quo than getting rid of Trump, or they’re planning to replace Joe — adopting a pretty fast and loose relationship with representative Democracy.”

Gray included a clip from Fox News’ Tucker Carlson in which he expresses grave doubts about Biden’s mental acuity.

“Ask yourself, is Joe Biden ready to lead this country? Could he find his car in a three tiered parking garage? Could he navigate a salad bar? And by the way, what exactly is his position on the Coronavirus pandemic?” Carlson asks.

“These are the mysteries Democrats now face.”

Bernie was too kind to go after Biden, but it’s coming.

Either Dem leadership cares more abt maintaining a corporate status quo than getting rid of Trump, or they’re planning to replace Joe – adopting a pretty fast and loose relationship w/ representative Democracy.

“Ask yourself, is Joe Biden ready to lead this country? Could he find his car in a three-tiered parking garage? Could he navigate a salad bar? And by the way, what exactly is his position on the Coronavirus pandemic? Those are the mysteries Democrats now face.” 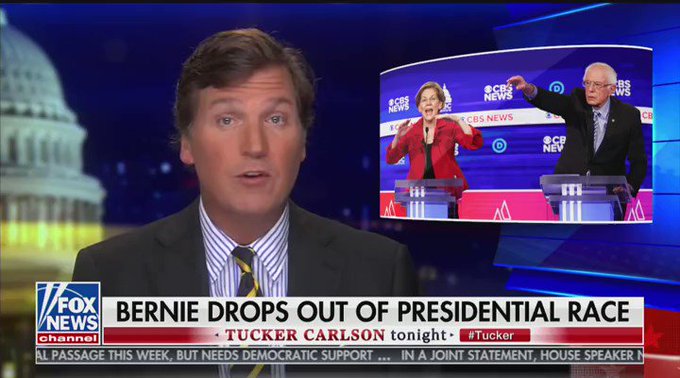 Gray responded to the attacks on Facebook, writing, “Thinking about how Biden supporters immediately photoshopped these images of me as essential workers in an effort to demean me, and what it says about how much they actually care about working class people.”

Whatever you think about Gray’s tweet, you have to admit she has a point. Biden is a deeply flawed candidate. Currently, not only does he face questions about his mental acumen, he’s also facing an accusation of sexual assault by former staffer Tara Reade, which allegedly took place in 1993.

And Biden’s flaws don’t end there. Always a gaffe machine, Biden seems to be getting worse with age. He struggles to speak, often unable to finish sentences. He seems almost doddering at times. Biden did have a decent performance in his last debate against Bernie Sanders, but as Gray inferred, Sanders didn’t really challenge Biden. A debate — even against a political novice like Donald Trump — would not go as well.

So, who are the Democrats looking at? In a perfect world they would simply replace Biden with New York Governor Andrew Cuomo, who has gained national notoriety with his handling of the COVID-19 outbreak in the state. But, thus far, Cuomo insists that he has no interest in national politics.

Maureen Dowd of the New York Times recently asked Cuomo if he would consider running, and he replied, “No. I know presidential politics. I was there in the White House with Clinton. I was there with Gore. No, I’m at peace with who I am and what I’m doing.”

Assuming Cuomo is being truthful, who else is there? All of Biden’s 2020 opponents — Kamala Harris, Elizabeth Warren, Amy Klobuchar, Michael Bloomberg, etc. — have already been rejected by the voters. Sanders has the strong support of the extreme left wing but Democrat insiders don’t believe he can win with his extremist views, and he just ended his campaign. Some have surmised that former First Lady Michelle Obama could be tempted to run, but she hasn’t expressed any interest.

Is it still possible that Hillary Clinton could be resurrected as the Democrat nominee? If not her, then who else?

If 2020 has taught us anything so far, it’s that even the unthinkable can happen.

James Murphy is a freelance journalist who writes on a variety of subjects, with a primary focus on the ongoing anthropogenic climate-change hoax and cultural issues. He can be reached at [email protected]

The “White” Identity Politics of the Left – VIDEO