Chesa Boudin triumphantly flashed the communist clenched fist salute to his throng of cheering supporters, as he walked to his swearing in ceremony as San Francisco’s new district attorney on January 8. It did not take long for Boudin to begin what critics have called his Friday Night Massacre. “Two days after being sworn in as San Francisco’s new District Attorney, Chesa Boudin reportedly fired at least seven attorneys from his office,” reported SFGate.com. “Among the Friday firings were multiple managing attorneys in the criminal division.”

“I had to make difficult staffing decisions in order to put in place a management team that will help me accomplish the work I committed to do for San Francisco,” Boudin said in a statement concerning his office shakeup.

As we reported in a series of stories last year, Boudin’s DA race was but one of the district attorney posts across the nation strategically targeted by the hardcore Left, and funded by George Soros and his Justice and Public Safety PACs.

Chesa Boudin is not just your garden variety “progressive.” His biological parents are unrepentant communist Weather Underground terrorists and convicted cop killers Kathy Boudin and David Gilbert. He was raised by his adoptive parents, unrepentant communist Weather Underground terrorists Bill Ayers and Bernadine Dohrn. His maternal grandfather, who also helped raise him, was Leonard Boudin, one of the Communist Party USA’s most notorious attorneys and the official legal counsel for Fidel Castro’s communist regime in Cuba. Chesa Boudin was named for Joanne Chesimard, the Black Liberation Army terrorist and convicted cop killer who escaped from prison and has lived for the past several decades in communist Cuba. She now goes by the name Asata Shakur and has become an icon to Black Lives Matter and leftists across the color spectrum.

Far from disavowing his parents’ terrorist activities and ideology, Boudin has said: “My parents were all dedicated to fighting U.S. imperialism around the world. I’m dedicated to the same thing.” As proof of his dedication, he journeyed to Venezuela during the reign of Hugo Chavez to work in Chavez’s communist regime. While serving in Chavez’s Miraflores Palace in Caracas, he says “From my computer in [Chavez’s employ] I took to signing my e-mails to friends and family ‘in the belly of the revolution.’”

He even served as tour guide and translator for his “parents,” Ayers and Dohrn, when they visited Venezuela as honored “educators” and privileged guests of dictator Chavez.

At his swearing in ceremony, Boudin and his supporters were treated to a congratulatory video message from radical U.S. Supreme Court Justice Sonia Sotomayor — an Obama appointee — who praised Boudin for his “strength of character and moral compulsion,” his “personal strength and commitment to reforming and improving the criminal justice system,” and his publishing of “scholarly and important social justice pieces.” Winding up her encomium, Justice Sotomayor said: “Chesa … the hope you reflect is a great beacon to many… The city of San Francisco will be so very well served by a man whose life creed is believing, as you told me, ‘We are all safer when we uplift victims, hold everybody accountable for their actions, and do so with empathy and compassion.’  Thank you for giving us hope.”

Nice-sounding words, but is there any substance to them? Does Boudin truly believe in holding “everybody accountable for their actions”? What about his “four parents”?  We are unaware that Chesa Boudin has made any statements that they should be held accountable for their terrorist bombings, robberies, and murders. To the contrary, he justifies their terrorist actions as “fighting U.S. imperialism.” What about their victims? What about police officers Edward O’Grady and Waverly Brown and Brinks guard Peter Paige, whose lives were taken by his parents’ actions? What about the widows and orphaned children of these men? Are they not deserving of “empathy and compassion”? Apparently not; they are of the bourgeois oppressor class, after all!

What about empathy and compassion for Kate Steinle and her family? She was killed by an illegal alien with a long criminal record who was free thanks to San Francisco’s sanctuary policy — which Chesa Boudin helped to write. As we reported previously, Garcia Zarate “had seven felony arrests and had been deported five times. San Francisco authorities refused to notify ICE (Immigration and Customs Enforcement) and released him. Thanks to their beneficence, Zarate was free to kill Kate Steinle as she was enjoying a walk along Pier 41 of San Francisco’s Embarcadero tourist area with her father and a friend.”

Has Boudin held himself accountable for this “sanctuary” victim? Of course not; in fact, he is doubling down, virtually guaranteeing that San Franciscans — as well as visitors to the City By The Bay — will be victims of the criminals benefiting from his “criminal justice reforms.”

In response to Justice Sotomayor’s  laudation, Boudin tweeted: “Thank you, Justice Sotomayor, for your leadership, the example you set for all of us, and for your thoughtful words of support. I’m humbled by your support of our movement & I promise to do the work required to make our vision of a just society a reality.”

Thank you, Justice Sotomayor, for your leadership, the example you set for all of us, and for your thoughtful words of support.

I’m humbled by your support of our movement & I promise to do the work required to make our vision of a just society a reality. 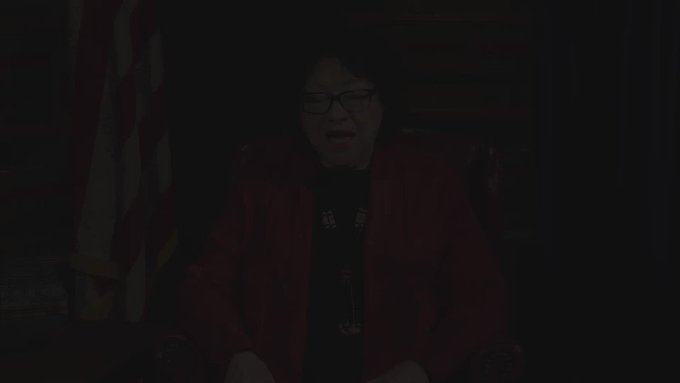 568 people are talking about this

The Purges Have Begun

Kimberly Guilfoyle, a former San Francisco assistant district attorney and former Fox News host, lambasted Boudin in a San Francisco Chronicle op-ed, condemning his firings as “dangerous and disruptive” and “a grave disservice to victims and the community.”

“As a former San Francisco assistant district attorney, I know this isn’t just a typical case of administrative shake-up,” wrote Guilfoyle, who is serving as a senior adviser to President Trump’s reelection campaign. “These firings weren’t based on any incompetency within the department; they were just a transparent effort to cripple the department’s prosecutorial ability. Boudin is advancing a radical ideology that’s focused on completely redesigning the city’s — and the nation’s — criminal justice system.”

Critics have pointed out that the prosecutors Boudin has fired are the ones who are known to be “hard on crime,” and they are being replaced by Boudin’s revolutionary comrades.

“The institutional knowledge possessed by someone like Ana Gonzalez, who headed the city’s gang unit, is irreplaceable,” Guilfoyle wrote. “Criminal organizations and their operations are often very complex, especially in a metropolitan area such as San Francisco. Without prosecutors who have a deep understanding of the various syndicates and the players within them, lawful prosecution of crimes becomes tremendously more difficult, allowing real criminals to walk free.”

All the Impeachment Cards on the Table – VIDEO

Venezuela Given Seat on UN Human Rights Council — One More Reason to Get US Out!

Why We Aren’t Having Conversations