Father James Martin SJ (shown), a Jesuit priest, LGBTQ advocate, and editor-at-large of the Jesuit magazine America, made waves on social media by showcasing an illustration that depicts Jesus as a gay man driving the money changers out of the temple.

The painting Martin shared came from the book Passion of Christ: A Gay Vision, a collection of works by homoerotic painter Douglas Blanchard.

Gospel: Today Jesus drives the money-changers from the Temple (Lk 19). NT scholars say this was one of the main events that precipitated his execution. Yet Jesus is not cowed by opponents. Another Gospel says “zeal” for his Father’s house “consumes him.” Also notice that Jesus… 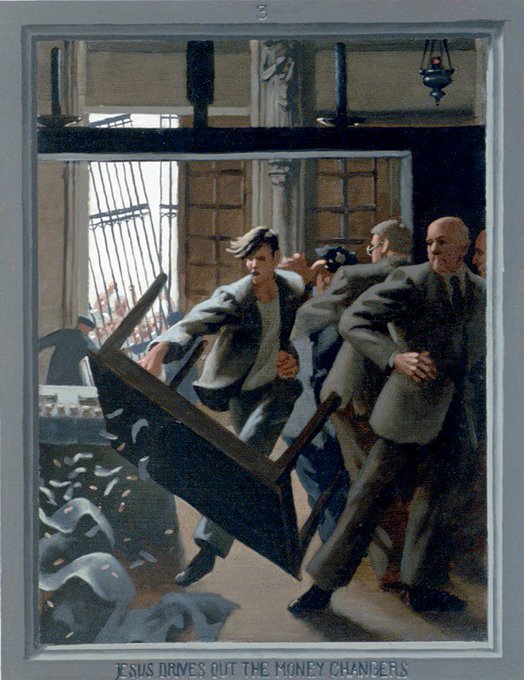 227 people are talking about this
“Meet Jesus as a gay man of today in a contemporary city with The Passion of Christ: A Gay Vision,” reads the Amazon product description for the book.

In stunning new images, the modern Christ figure is jeered by fundamentalists, tortured by Marine look-alikes, and rises again to enjoy homoerotic moments with God. His surprisingly diverse friends join him on a journey from suffering to freedom. Readers call it “accessible but profound.” Some are moved to tears.

The 24 illustrations in the collection depict key moments in Jesus’ life, including his crucifixion and resurrection.

The Amazon description goes on to say that a

“queer Passion is important now because Christianity is being used to justify hate and discrimination against lesbian, gay, bisexual and transgender people.”

On the book’s website, Blanchard is quoted as saying that

“Christ is one of us in my pictures. In His sufferings, I want to show Him as someone who experiences and understands fully what it is like to be an unwelcome outsider.”

“grapple with his own faith struggles as a New Yorker who witnessed the 9/11 terrorist attacks.”

One of the pictures in the series recreates Jesus’ triumphal entry to Jerusalem with the now-clean-faced, homosexual Jesus on horseback surrounded by a multicultural crowd bearing signs that say “Freedom” and “Justice.”

Another shows Jesus being beaten by Christian priests.

Martin, who was a frequent guest on Stephen Colbert’s Colbert Report while the program still aired, has stirred controversy before over his stance on LGBTQ issues, which has included tweeting support for gay pride marches and urging the Catholic Church to accept gay families.

To all my many #LGBTQ friends, Catholic and otherwise: Happy #PrideMonth Be proud of your God-given dignity, of the gifts God has given you, of your place in the world, and of your many contributions to the church. For you are “wonderfully made” by God (Ps 139). #PrideMonth2019

7,105 people are talking about this
After the release of Martin’s 2017 homosexual outreach book Building a Bridge, Philadelphia Archbishop Charles Chaput reprimanded the Jesuit priest for merely offering gays “affirmation” rather than calling them to “conversion.”

Archbishop Chaput wrote that what Martin’s book “regrettably lacks” is “an engagement with the substance of what divides faithful Christians from those who see no sin in active same-sex relationships.”

“The Church is not simply about unity — as valuable as that is — but about unity in God’s love rooted in truth,” he wrote.

On another occasion, Archbishop Chaput told members of the synod of bishops gathered in Rome that “There is no such thing as an ‘LGBTQ Catholic’ or a ‘transgender Catholic’ or a ‘heterosexual Catholic,’ as if our sexual appetites defined who we are, as if these designations described discrete communities of differing but equal integrity within the real ecclesial community, the body of Jesus Christ.”

Martin, whom Pope Francis appointed as a consultant to the Vatican’s Secretariat for Communications in 2017, took aim at the Archbishop’s remarks on Twitter.

Why should we use “LGBT” or “LGBTQ” in the church? Because people have a right to name themselves, and this is the name many choose. And there is such a “thing” as an “LGBTQ Catholic” and a “transgender catholic.” They are members of the Body of Christ. http://www.catholicherald.co.uk/news/2018/10/04/archbishop-chaput-tells-synod-lgbtq-should-not-be-used-in-documents/#.W7Y63yrHuvI.twitter …

Archbishop Chaput tells synod: ‘LGBTQ’ should not be used in Church documents

566 people are talking about this

The Catholic Church’s official stance on homosexuality is that of the Bible, which “presents homosexual acts as acts of grave depravity.” The Church urges treating those who struggle with same-sex attraction “with respect, compassion, and sensitivity” while encouraging them to lead chaste lives.

“If Jesus came back today, would he be crucified all over again?” the Amazon description for The Passion of Christ: A Gay Vision reads.

Perhaps. But from what we’ve seen of the increasingly intolerant left, would it be devout Cthristians or the social justice mob shouting “crucify him!”?

Luis Miguel is a writer whose journalistic endeavors shed light on the Deep State, the immigration crisis, and the enemies of freedom. Follow his exploits on Facebook, Twitter, Bitchute, and at luisantoniomiguel.com.

Pompeo: ‘The CCP Demands It Alone Be Called God’

Why We Aren’t Having Conversations

Dave Chappelle: First Amendment Only Safe Because of the Second Amendment

Painter Akiane Kramarik on Her Art and Spiritual Journey