After a survey again showing that liberals have higher rates of mental problems comes another warning that our Left has left sanity: Indications that, as during the 2016 presidential campaign, violence against conservatives is increasing in the run-up to the November election.

The phenomenon is so striking it even has a name, Trump Derangement Syndrome (TDS), though such a label risks trivializing a truly serious problem. Whatever the case, Fox News reports on the issue:

A startling rash of threats and violent incidents targeting Republican voters in recent weeks is raising concerns about the increasingly toxic political climate, just as the 2020 presidential primaries are getting started.

The incidents began earlier this month when a Florida man, Gregory Timm, 27, allegedly rammed his van into a Republican Party voter registration tent. According to reports, Timm ran over chairs and tables, and witnesses said he recorded the scene moments after the incident, made an obscene gesture and sped off.

Timm has been charged with two counts of aggravated assault on a person 65 years old or older, one count of criminal mischief and driving with a suspended license. An arrest report said Timm told deputies he did not like President Trump and “someone had to take a stand.”

There have been other recent cases, too. On February 11, 34-year-old Patrick Bradley of Windham, New Hampshire, slapped a 15-year old boy across the face and then assaulted two other adults who intervened. The victims were manning a Trump campaign tent.

“Bradley is also accused of throwing Trump campaign signs and attempting to knock over the campaign tent,” Fox added (video below).

Bradley said in court that he has a history of “mental health issues.” No surprise there. Numerous studies show that leftists tend to.

Onwards (and downwards?), protesters at the University of California at Santa Cruz this weekend “smashed a College Republicans information table, according to reports,” Fox tells us. “A video [below] posted on social media shows two protesters tearing up placards and ripping down signage — with one of them appearing to spit on a 13-star ‘Betsy Ross’ American flag that is seen lying on the ground.”

Meanwhile, “Police at ASU are investigating after a video began circulating on social media showing a man screaming, ‘slash Republican throats,’” reports Campus Reform. Video of the incident (below) was posted online by Students for Trump at ASU on February 5.

Students for Trump at ASU@sft_asu

Watch as a tolerant leftist threatens to “slash the throat” of @realDonaldTrump and every Republican.

We will NOT let the left silence us! @TrumpStudents #KeepAmericaGreat 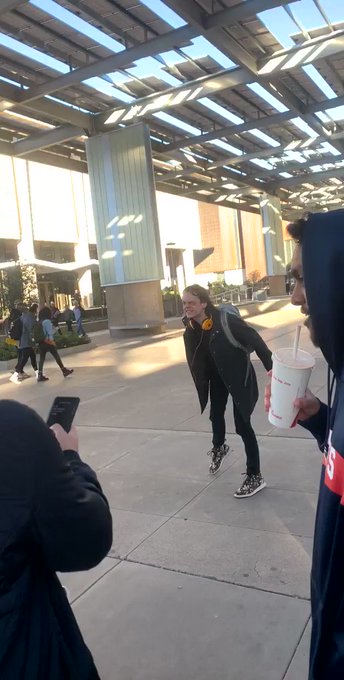 10.9K people are talking about this

Also last week, retired NYPD officer Daniel Sprague of Staten Island “says he got punched in the face at a Tennessee bar, all because he was wearing a birthday hat and shirt with Trump-like slogans,” Fox informs. Here’s a tweet about the incident from New York City councilman Joe Borelli:

Meet my pal Danny. He’s a retired #NYPD, & a pillar of our community 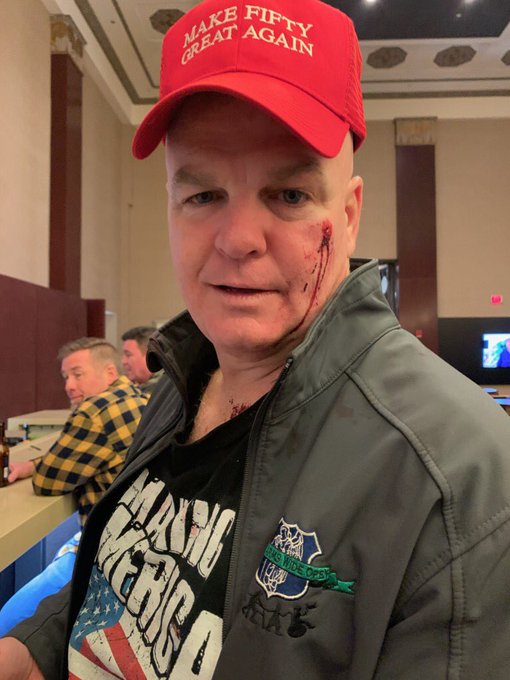 1,308 people are talking about this

Then, “last month a Florida man was sentenced to 90 days in jail and one year of supervised probation after slapping the bill of a man’s ‘Make America Great Again’ hat before telling the man to ‘go back to Russia you f— communist’ and spitting on him,” Fox also relates.

Again, though, frequent attacks on conservatives are nothing new, having become more common with President Trump’s rise. Below is a video from early 2017 showing a 12-year-old boy on a bus being attacked for wearing a MAGA hat.

While all these attacks are, in the least, the result of media propaganda and moral degradation, sometimes the violence is orchestrated. Just consider, for instance, how Project Veritas uncovered in 2016 a Democrat scheme to incite violence at Trump rallies.

Caught on hidden camera, a Democrat operative named Scott Foval outlined an operation — allegedly approved by Hillary Clinton — in which he and fellow agitators went so far as to pay mentally ill people to instigate trouble. He even unabashedly proclaimed, “We’re starting anarchy here” (video below. Warning: foul language).

In reality, though, this violence not only isn’t new; it’s actually very, very old. Violence has ever defined the Left, from its French Revolution birth to Joseph Stalin’s purges to Mao Tse-tung’s “Cultural Revolution” to the Khmer Rouge’s “killing fields” and beyond. In fact, leftists’ 20th century body count alone is approximately 100 million.

When the mask drops, leftists often reveal these bloody intentions, too. Marxist Chinese leader Mao once said, “Communism is not love. Communism is a hammer which we use to crush the enemy.” Cambodian socialist leader Pol Pot stated, “Better to kill an innocent by mistake than spare an enemy by mistake.”

Then again, they were only following their ideological master. Communist Manifesto co-author Karl Marx prescribed violence himself, writing in an 1848 newspaper article that “there is only one way in which the murderous death agonies of the old society and the bloody birth throes of the new society can be shortened, simplified and concentrated, and that way is revolutionary terror.”

Then there was Soviet leader Stalin, who proclaimed, “We will destroy each and every enemy, even if he was an old Bolshevik; we will destroy all his kin, his family.” Note that the only sin of the “old Bolsheviks” — who helped author the 1917 Russian Revolution and vault the Soviets to power — was not being a new Bolshevik.

And for all leftists’ talk about “change,” nothing has changed. When Bernie Sanders’s campaign workers were caught on undercover video revealing their dark designs, it was expressed that they wanted the Clintons (our “old Bolsheviks”) dead, too.

Oh, they also said they aimed to put political opponents in “gulags” — that is, the opponents not summarily executed.

So what’s left to be said? Perhaps we actually should take the advice here of another left-winger, the late writer Maya Angelou.

To wit: “When people show you who they are, believe them.”

Photo show protester who was arrested for punching a Trump supporter and trying to steal his flag and hat, Chicago, Oct. 28, 2019: AP Images

“The Age of Self-Inflicted American Shame is Over” Says Secretary of State Mike Pompeo in Speech in Cairo today!