JP Morgan Study: COVID Lockdowns INEFFECTIVE; Millions of Livelihoods Being Destroyed for NOTHING

Are politicians now continuing the lockdowns because admitting error — that they’re guilty of advancing one of American history’s greatest blunders — would mean political destruction? Are they continuing to destroy the careers of millions to save their own (when, perhaps, something more sinister is not at work)? Many may now draw this conclusion after yet another study, this one by establishment company JP Morgan, has found that the lockdowns have done nothing to alter the Wuhan coronavirus pandemic’s course.

As the Daily Mail reports:

Falling infection rates since lockdowns were lifted suggest that the virus ‘likely has its own dynamics’ which are ‘unrelated to often inconsistent lockdown measures’, a report published by the financial services giant said.

Denmark is among the countries which has [sic] seen its R [infection] rate continue to fall after schools and shopping malls re-opened, while Germany’s rate has mostly remained below 1.0 after the lockdown was eased.

The report also shows many US states including Alabama, Wisconsin and Colorado enjoying lower R rates after lockdown measures were lifted.

Author Marko Kolanovic, a trained physicist and a strategist for JP Morgan, said governments had been spooked by ‘flawed scientific papers’ into imposing lockdowns which were ‘inefficient or late’ and had little effect.

‘Unlike rigorous testing of new drugs, lockdowns were administered with little consideration that they might not only cause economic devastation but potentially more deaths than Covid-19 itself,’ he claimed.

The JP Morgan report includes graphs [below] showing that ‘the vast majority of [states and] countries had decreased infection rates’ after lockdowns were lifted.

JPMorgan has a devastating piece arguing that infection rates have declined — not increased — in states where lockdowns have ended, “even after allowing for an appropriate measurement lag.” (Kolonavic) 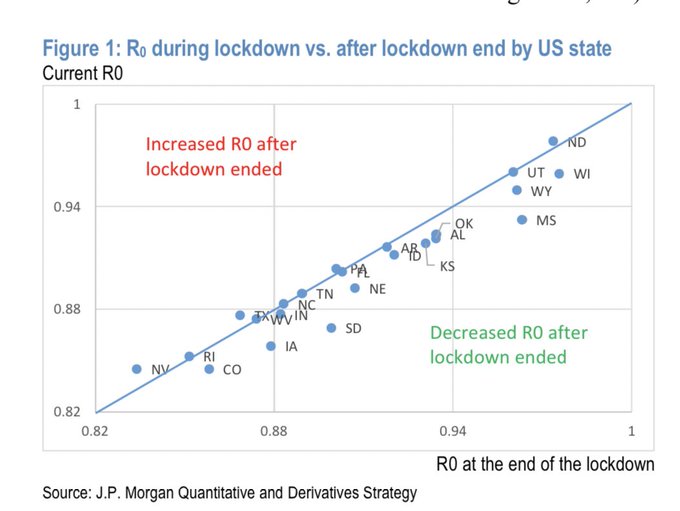 6,470 people are talking about this

Same goes for various countries, adds JPM. “This means that the pandemic and COVID-19 likely have its own dynamics unrelated to often inconsistent lockdown measures that were being implemented..” 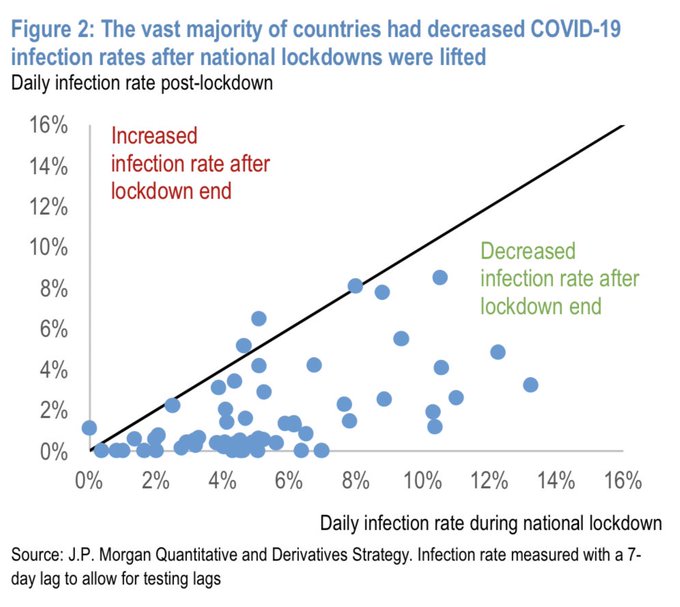 852 people are talking about this

Note that the mainstream media and Left in general have either pilloried or praised states for “opening” too soon, too rapidly, wrongly, or for being “cautious.” Yet the above pattern holds regardless.

NBC journalist Quintanilla also points out (tweet below) that study author Kolanovic has a solid, albeit possibly short, track record.

JPMORGAN: “We believe we’ve seen a peak in new case growth in the US 3-4 days ago,.. deaths will peak in about a week, so we look for a limited reopening of the economy in 1-2 weeks. .. And we think we will be able to recover the losses in equities sometime next year” (Kolanovic)

Kolanovic’s track record is certainly better than that of Imperial College’s ever-wrong Neil Ferguson, who helped spark the worldwide lockdown hysteria with now disproven doomsday predictions; and our Dr. Anthony Fauci, who never made a prescription he was unwilling to change at the next media interview, the latest example being how he’s now against lockdowns’ perpetuation after being for it a week ago.

Where Kolanovic goes wrong is in also saying in his study, as the Express reports, “In the absence of conclusive data, these lockdowns were justified initially.” Now, perhaps the researcher is simply trying to give pro-lockdown politicians a face- (and career-) saving way to end the insanity, but the truth is revealed with a simple question:

What do you do in the face of inconclusive data, go with the default or with some grand, untried experiment? The devil you know or the devil you don’t know?

We went with the latter and now, the Express also writes, “Economists have predicted a global recession to rival that of the Great Depression of the 1930s and already millions of workers have lost their jobs” due to the lockdowns. And something was overlooked.

Chinese Revise Number of Virus Deaths in Wuhan. But Are They Reliable?