If you thought our immigrationist leaders would let a virus impede their demographic-change endeavors, think again. For while the San Francisco Bay area is under a shelter-in-place order, government-mandated curfews and business closings are increasingly common, and civilian life grinds to a halt, refugee resettlement has been continuing (at least as of last week) — this includes resettlement from Wuhan virus-stricken countries.

As Refugee Resettlement Watch’s Ann Corcoran wrote Monday, “1,768 refugees who arrived in the US were placed between February 15th and yesterday [Sunday].” She continued:

Thinking maybe a slowdown was evident if I checked the numbers for the last week, I found that we ‘welcomed’ 488 refugees to your towns and cities in the last seven days. No slowdown. All traveled through airports in Asia, Africa and Europe.

Moreover, those “numbers might not sound like a lot, but remember Trump had already curtailed the numbers in general,” points out Conservative Review’s Daniel Horowitz. “One has to wonder if we’d continue the normal pace had Trump not reduced the numbers for other reasons.”

Note also that Washington (number two on the “welcoming” list) is the state hardest hit by the Wuhan virus, accounting for approximately two-thirds of our nation’s associated deaths. And some residents in numero uno, California, are, again, subject to a shelter-in-place order.

But our immigrationists won’t force “refugees” to shelter in place. “One would think that shutting off international travel and immigration — the very first line of defense that directly addresses the source of importing diseases — would have long been… [effected] before we begin infringing upon domestic liberties,” Horowitz writes. “Yet, in Orwellian fashion, it looks like elements of immigration might be the last activity standing in this county [sic].”

Now you see why I continually warn of a more deadly disease plaguing us: immigrationism — the belief that immigration is always good, always necessary, must never be questioned, and must be the one constant in an ever-changed universe of policy.

Give Me Immigration or Give Me Death

“Even if the government is more carefully screening refugees for health concerns, why would we strain our services and create a logistical problem to bring in more immigrants at a time when we are shutting down many aspects of ordinary life for Americans?” Horowitz asks.

In today’s America, citizens sacrifice first and aliens second (if at all). Related to this, I’ve reported in the past on how illegals can get more welfare benefits than citizens and are often above the law.

If this seems above reason, try this on for size: Right “‘now we are bringing in the largest numbers of refugees being processed through Ukraine and through Malaysia, which has seen a recent spike in coronavirus cases,’ said Corcoran in an interview with CR,” Horowitz relates.

“‘Those refugees, including the large numbers coming in through Africa, are traveling through airports on three continents,’” she continued. “‘American volunteers working for resettlement agencies [which make big money resettling foreigners] are then contractually required to meet the arriving refugees in airports across the country and take them to their new apartment, thus exposing even more Americans to possible contact with the COVID-19 virus. Seems insane to me as the government is telling us to put our lives on hold and stay home.’”

Horowitz also tells us that the Congo, another major “refugee” source, tamed the deadly Ebola outbreak only this week. Moreover, we were still processing asylum claims at our border as of last week (is it continuing?) — even of Chinese nationals.

If it’s any consolation, the United States isn’t alone in this immigrationist insanity. Germany, whose leader Angela Merkel was the main author of Europe’s recent years’ Muslim migration crisis, didn’t halt flights into her country from Iran and China until public outrage compelled her to do so just yesterday, reports the Jerusalem Post. As journalist Mina Bai tweeted:

A plane from Iran came to Germany/Frankfurt tonight/last night despite high risk of #Corona without any quarantine.@BenWeinthal have u seen this? 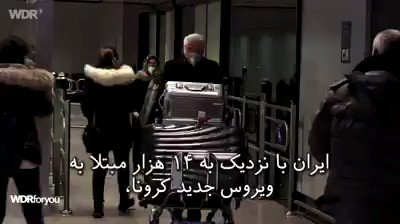 Then there’s this out of Canada (hat tip to Horowitz):

TRUDEAU DID THIS: Watch in real time as China Eastern Flight 581 flies to Vancouver. It’ll be here in 90 minutes. No screening, no fever tests, no quarantines. https://flightaware.com/live/flight/CES581 …

Returning to the “refugee” situation, the kicker is that it’s a con. The spirit of granting foreigners safe haven is that such is provided until the danger in their native land has passed and they can be repatriated. But immigrationists have perverted it into what it has become: a permanent situation with eventual citizenship virtually guaranteed.

So it’s clear that “refugee resettlement” long ago became just another way to increase legal immigration. It’s also clear why: The vast majority of today’s (im)migrant groups vote Democrat upon naturalization (and sometimes before).

Now you know why — while wealthy non-Western nations such as Japan, South Korea, and Saudi Arabia are never expected to bear refugee burdens — our immigrationists will die with their statism-importing boots on. (Or, at least, you’ll die with their boots on. We’re talking about the rarefied-air set here, and there isn’t much refugee resettlement in Martha’s Vineyard.)

As for Wuhan virus concerns, you have to break a few eggs if you want to make an omelet. Besides, immigration will surely end — when this country is so undesirable that nobody wants to come here anymore.

The Two Biggest State of the Union Takeaways