In the wake of Prime Minister Boris Johnson’s announcement of a complete lockdown of the United Kingdom, outbreaks of violence have been reported in the nation. Supermarket chains and food-delivery services have been particularly hard hit.

In Bristol, a city in southwest England, two home-delivery food trucks were attacked and set on fire. What authorities are calling an “anti-social” group of teenagers took to the streets destroying cars and throwing bricks through windows.

Richard Walker, the chairman of Iceland Foods, a supermarket chain in the U.K., tweeted about the attack on Tuesday: “Two of our vans in Southmead were burnt out last night during disturbances in the town. At a time when home delivery is literally a lifeline for some vulnerable people, this is sickening.”

2 of our vans in Southmead were burnt out last night during disturbances in the town. At a time when home delivery is literally a lifeline for some vulnerable people, this is sickening. 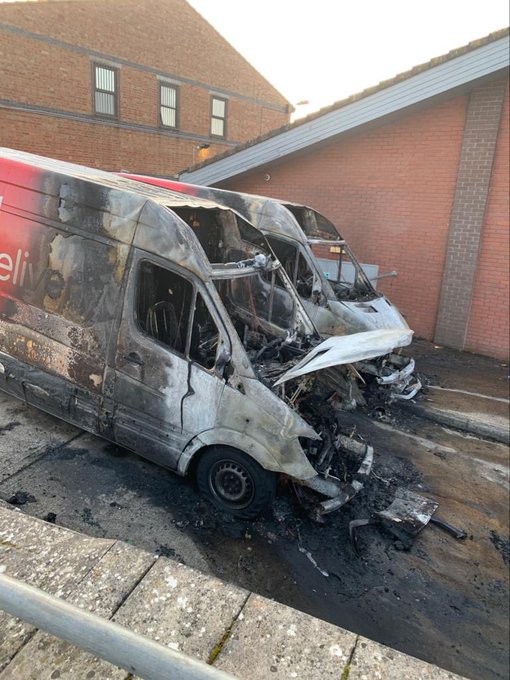 The unrest broke out at approximately 9:30pm on Monday evening, just hours after Johnson’s announcement that all but essential businesses would shut down and almost all public gatherings were prohibited in the United Kingdom for a period of at least three weeks.

“I must give the British people a very simple instruction. You must stay at home. Because the critical thing we must do is stop the disease spreading between households,” Johnson said on Monday.

But the groups of “youths” in Bristol apparently did not get the message, as they took to the streets and engaged riot police by throwing projectiles at them as the police attempted to disburse the miscreants.

“Just hours after the Prime Minister announced everyone in the country should stay home to save lives it is beyond belief anyone would be so reckless and thoughtless,” said Neighborhood Chief Inspector Mark Runacres. “We believe that a group of teenagers were involved in these disturbances. I have one message for them, their parents and carers. Stay at home. Save lives.”

The incidents in Bristol were not the only examples of civil unrest in Great Britain after the lockdown was announced. Panic buying was reported in grocery stores across the nation as shoppers tried to stock up to prepare for the lockdown. Incidents of fighting over supplies were reported.

In Gateshead, a town in northeastern England, thieves broke into the JR Holland Team Valley Trading Estate, damaging seven delivery vans and stealing diesel from the vehicles. The vans were part of an effort to supply hospitals and care homes with essential supplies during the coronavirus pandemic.

“They’ve smashed the fencing, smashed the tops of seven wagons, stolen the diesel and spilled it all over the yard,” said John Holland, the owner of the company.

In Weston, a seaside town near Bristol, a group of vandals stole and then torched a delivery van of the supermarket chain Asda in the early hours of Tuesday morning. The van was discovered later that morning and was totally destroyed.

Three U.K. supermarket chains, Asda, Tesco, and Sainsbury’s, reported that their websites had crashed on Tuesday in response to Johnson’s announcement. Although people are still allowed to go out and purchase groceries, Johnson stressed that it should be as “infrequently as possible,” and encouraged citizens to use home delivery services.

Most of the U.K.’s major supermarket chains announced the rationing of certain items and have banned multiple purchases of most goods. They have also changed store hours to allow for more time to restock shelves.

Many in the U.K. have been shocked by the unrest and the attacks on the delivery vans in particular, going so far as to suggest that the army be brought in to protect deliveries. Others have suggested that criminals caught doing such acts during the pandemic should receive harsher penalties during the outbreak.

Johnson’s declaration on Monday has already given police emergency powers to arrest anyone gathering in large groups and unwilling to disburse. Violators can be fined up to £1,000 ($1,200) for not complying with the new government edicts.

In a crisis, people tend to panic and sometimes misbehave.  Governments, on the other hand, tend toward authoritarianism. They slip into it rather easily, actually. We have to be careful to not let a crisis situation — if that’s truly what this is — devolve into an excuse for the government to steal liberty from us.

James Murphy is a freelance journalist who writes on a variety of subjects, with a primary focus on the ongoing anthropogenic climate-change hoax and cultural issues. He can be reached at [email protected]

Can We Disinfect the Media? Bleaching Out the Truth on Trump and COVID-19