Cuomo Ridicules Trump for Taking Hydroxychloroquine, but Took Quinine Himself to Fight Virus

Cuomo took great pains to show that Trump is ignoring science, and that the drug doesn’t work on the Asiatic pathogen either as a cure or preventive.

But Cuomo, it turns out, took a form of the drug himself when he was sick.

Had they known that when they watched his PrimeTime broadcast on Monday or looked at his Twitter feed, they might have admonished the volatile anchorman with this advice: “physician, heal thyself.”

Cuomo said Trump will win the public debate over the drug because he believes the drug will work and so “the science is irrelevant.”

Using the drug, Cuomo opined, “speaks to optimism” and “speaks to strength.”

Then, in either the voice of a man who has consumed way too much soy, or perhaps Karen, the hectoring busybody of the ubiquitous Internet meme who always demands to speak with the manager, Fredo mocked the party of his strong, smart brother, Andrew, the governor of New York:

Why did Pres. Trump’s reveal he is taking hydroxychloroquine?
As a distraction from his lack of a plan or real solutions, warns @chriscuomo: “Don’t take the bait.” https://cnn.it/3bJOe5V 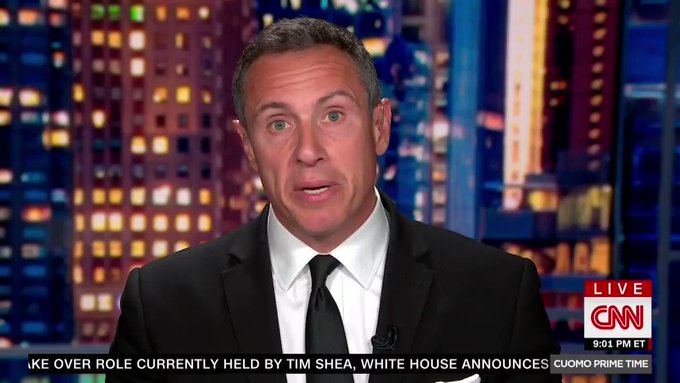 3,631 people are talking about this

Then, retweeting a police video of a giant block party in Florida, Cuomo quipped, “No worries. They can just take some chloroquine.”

Mrs. Cuomo Begs to Differ
That isn’t what his wife thought when she was giving him remedies from Linda Lancaster, an “energy medicine physician,” as The Daily Caller reported.

A week later, TheDC noted, she explained what “potentized quinine” is:

Potentized quinine (OXO); it’s derived from the nontoxic bark of Peruvian-grown quinine plants. It is a natural antibiotic (it’s being used in India with very good results). This is not on the market here; Dr. Lancaster has made this in her lab for 40 years, and I took this for my Lyme. (The medicine Plaquinol, which many doctors are using for COVID-19 is similar to quinine, but it has negative side effects.)

Quinine, of course, is an anti-malarial drug kind of like hydroxychloroquine, brand name Plaquenil. Indeed, as TheDC observed, the latter is a synthetic derivative of the naturally-occurring substance that Christina Cuomo gave her husband.

The newsman’s better half also suggested that virus patients might consult a “Chinese herbalist or naturopath,” which raises the question of whether the skeptical anchorman believes the science he claims that Trump has dismissed.

Cuomo’s prescribing “doctor,” his wife informed readers, is “an energy medicine and homeopathic physician” who practices “light harmonics,” a “healing system based on the philosophies of yoga, ayurveda, anthroposophy, TCM, naturopathy and homeopathy.”

Ayurveda is Indian pseudoscience, while anthroposophy is German mysticism.

Radionics, another of Lancaster’s methods, uses electromagnetic radiation to heal illness. She also trained in medical radiesthesia, another pseudoscientific practice that involves using the hands or dowsing rods to detect corporeal radiation.

A look at Lancaster’s website suggests that she has healing powers far beyond those of more pedestrian physicians who graduated from medical school — such as Dr. Anthony Fauci, who has appeared on Cuomo’s program and called him every day while he was sick.

The unusual diet and treatment regimen Cuomo endured might be one reason he flew into a rage when a cyclist confronted him on Easter Sunday about breaking quarantine.

Identified as David, the cyclist was riding by Cuomo’s ritzy property when he spotted the familiar face.

“Is that Chris Cuomo?” the curious cyclist said he asked the hot-headed anchor’s wife. “Isn’t he supposed to be quarantined?”

That’s when Cuomo exploded like Tony Soprano after a bad day at the Bing.

“Who the hell are you?!” Cuomo asked the shocked “fat-tire biker,” as Cuomo described him. “I can do what I want!”

Then, David said, Don Cuomo warned of what was to come:

“You’ll deal with this later,” he warned. “We will meet again.”

R. Cort Kirkwood is a long-time contributor to The New American and a former newspaper editor.

Pros and Cons of Staying at a Sonder* – Summer Vacation Stays