Can We Disinfect the Media? Bleaching Out the Truth on Trump and COVID-19

“A lie can get halfway around the world while the Truth is putting its boots on,” goes the apocryphal saying. This was proven by the media, again, late last week when “activists falsely claimed that Trump ‘urged Americans to inject themselves with disinfectant’ and ‘told people to drink bleach,’” as the Daily Wire relates it, to combat the Wuhan virus.

In reality, President Trump merely asked a question relating to possible medical interventions at his Thursday virus press briefing, and the media twisted it beyond recognition — and into a suggestion.

Here’s what actually happened at the briefing. Bill Bryan, Under Secretary for Science and Technology at DHS, articulated findings about how solar light quickly kills the coronavirus (in three minutes, according to one study) and how higher temperature and humidity aren’t “favorable” to it, either.

Bryan also stated that the “virus does not survive as well in droplets of saliva, and that’s important because a lot of testing being done is not necessarily being done, number one, with the COVID-19 virus and number two, in saliva or respiratory fluids.”

“And thirdly, the virus dies the quickest in the presence of direct sunlight under these conditions,” Bryan continued.

Bryan then addressed disinfectants’ utility, mentioning that bleach will kill the virus in five minutes and isopropyl alcohol will destroy it in 30 seconds — and even more quickly with rubbing.

Now, you might think findings indicating that sunlight and higher temperatures and humidity degrade the virus — which could mean the disease is seasonal and won’t be a summertime threat — would be the story. But not with our mainstream media.

Instead, they seized upon what Trump asked in response, which was:

So, I’m going to ask Bill a question that probably some of you are thinking of if you’re totally into that world, which I find to be very interesting. So, supposing when we hit the body with a tremendous, whether it’s ultraviolet or just very powerful light, and I think you said that hasn’t been checked, but you’re going to test it. And then I said supposing you brought the light inside the body, which you can do either through the skin or in some other way. And I think you said you’re going to test that too. Sounds interesting. And then I see the disinfectant, where it knocks it out in a minute, one minute. And is there a way we can do something like that by injection inside or almost a cleaning? Because you see it gets in the lungs and it does a tremendous number on the lungs, so it’d be interesting to check that, so that you’re going to have to use medical doctors with, but it sounds interesting to me. So, we’ll see, but the whole concept of the light, the way it kills it in one minute. That’s pretty powerful.

Some may fancy this fanciful, and maybe it is, though CD Media claims otherwise. “There already exists these two therapies, called UV therapy as well as ozone therapy[,] and both are already being studied as a treatment to the novel Chinavirus,” the site writes. “The one that has CNN hyperventilating is ozone therapy which has been used successfully for cancer patients. O3 gas is infused into the body as a disinfectant to improve the intake of oxygen while ramping up the immune system and efficiently killing bacteria and viruses.”

I can’t comment on that science. I’ll also say that Trump didn’t do himself any favors by later claiming his remark was “sarcastic.” The correct defense is simple: The president asked a question. A question is not a suggestion. Full stop.

Moreover, although Trump’s above query is the kind better asked in private, he has always been the kind of man to often “think out loud,” speak conversationally, and engage in open, forthcoming dialogue. This very un-politician-like quality is part of his appeal.

Returning to the Thursday press briefing, a few moments after Trump’s comments, “ABC News reporter Jon Karl asked Bryan, ‘The president mentioned the idea of a cleaner, bleach and isopropyl alcohol emerging,” the Daily Wire further relates. “There’s no scenario where that could be injected into a person, is there?’”

Bryan said no, of course, and Trump clarified his statement, saying that it “wouldn’t be through injections” and then talked about topical applications. But this didn’t matter to the mainstream media.

CNN’s Jim Acosta initiated the propaganda (tweet below), according to CD Media.

CNN’s Jim Acosta telling Americans not to inject themselves with disinfectant….
It’s after President Donald Trump asks his science advisor to study using UV light on the human body and injecting disinfectant to fight the coronavirus…… 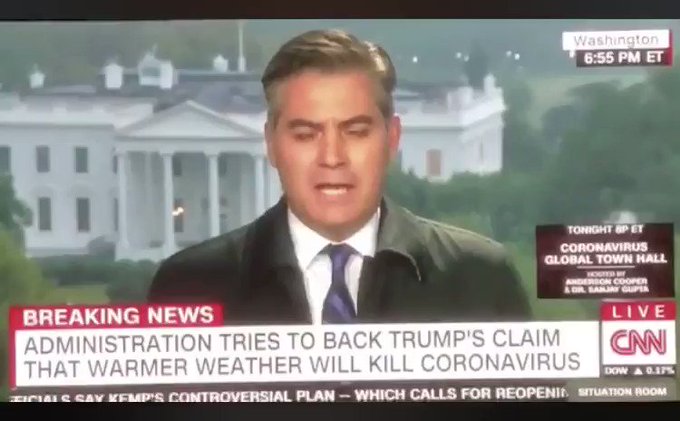 Other leftists then chimed in. Consider the tweet below, from a left-wing county commissioner in Tennessee named Chris Jackson.

Tonight the far left seems more upset about a report suggesting a former Treasury Secretary is advising @JoeBiden on economic policy than the fact that @realDonaldTrump urged Americans to inject themselves with disinfectant.
This is our political reality in a nutshell.

✔@jdmaccoby
Trump downplayed the virus then called for rebellion then told people to drink bleach, maybe it’s time to stop taking his press conferences live
1,528
06:48 – 24 Apr 2020
Twitter Ads information and privacy
694 people are talking about this

Insofar as leftists are being Machiavellian — and they often are — the goal here would be to resurrect the “narrative” they initiated when reporting on a prolific Democrat donor who poisoned her husband with aquarium disinfectant and then claimed she was heeding Trump’s words relating to malaria drug chloroquine.

But if the Left’s track record on science is any indication, the woman’s behavior is not surprising. As CD Media points out, the Left may mock Trump and other conservatives for allegedly ignoring science, but itself claims a boy can become a girl just by taking hormones and willing it (where there’s a will there’s a gay, I guess).

Also note that the left-wing mainstream media have consistently refused to report the truth on the Wuhan virus and instead facilitate the “lockdown” strategy’s perpetuation, which threatens to destroy our economy and destabilize our civilization. Most recently, they’ve ignored a study indicating that the lockdowns have no positive effect and may actually be a cure worse than the disease.

So what’s really scary here is not what Trump may say, but that the mainstream media endeavor to, in all things, lock down the Truth. For America will survive the Wuhan virus. Whether she can survive a dishonest media’s viral lies is another question.