If prominent journalists can’t do simple math, how can they do complex political science? Some may thus wonder after MSNBC host Brian Williams and New York Times editor Mara Gay claimed on live television that ex-presidential candidate Michael Bloomberg’s $500 million in ad buys equates to $1 million per American. In reality, it only amounts to enough to buy a cup of coffee (and not at Starbucks, either).

“Bloomberg spent $500 million on ads. The U.S. population is 327 million,” said Williams, quoting a tweet by journalist Mekita Rivas on MSNBC’s The 11th Hour Thursday night. “He could have given each American $1 million and still have money left over, [sic] I feel like a $1 million check would be life-changing for people. Yet he wasted it all on ads and STILL LOST.”

“It’s an incredible way of putting it,” Williams summed up, addressing Gay, whom he was interviewing.

Incredibly and disturbingly stupid, maybe. In reality, the United States’s current population of approximately 331 million people, divided into $500 million, is about $1.51 per person (not counting illegal aliens).

The kicker is not just that Rivas — who writes much about fashion with a social-justice-warrior bent for Teen Vogue (‘nough said?) — composed the tweet, sent it, and presumably didn’t realize her error until others pointed it out. It’s also that the tweet got past a TV production crew, and perhaps editors, without anyone sounding an alarm. Then there’s how Williams and Gay had apparently read the tweet in advance, and thus had time to ponder it, as the video below indicates.

This is the saddest clip in TV history.

2,025 people are talking about this

As you might imagine, this new math slip-up inspired mockery on Twitter, including by someone I know fairly well (below).

Re. my tweet on the NY Times editor and B Williams, who thought that $500 million equates to more than $1 million per American: Now we know why left-wingers think socialism adds up.

Either that, or we know why they’re immigrationists.

(They think there are only 328 Americans.)

(Then again, we may get to that point, as Joe Biden said in a Democrat debate that 150 million Americans have been killed with guns since 2007.)

“Mike Bloomberg spent enough on his campaign to give every American $1 million.” @BWilliams on @11thHour @MSNBC

“enough to give each American a $1M check” 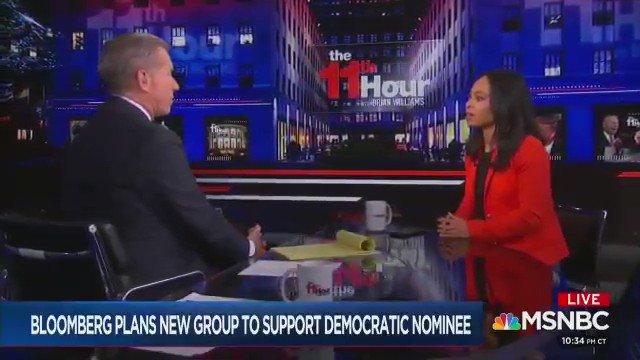 What do you do when you actually tell the world you’re “bad at math”, yet the biggest news organizations pick up your #Bloomberg #math tweet anyways and run with it on national tv?

While Williams reacted likewise, it didn’t spare him the deprecation of others. Radio host Mark Levin, for example, pulled no punches in calling the MSNBC anchor “dumber than ever.”

Such mockery could be considered uncharitable, especially if the problem were merely dumbness. (People don’t choose their intelligence. Of course, we’d then have to ask about the perhaps smarter people who decided to put the dumb on TV.) At issue is that these are actually people smart enough to do better — but they didn’t show due diligence.

We all have momentary brain cramps. Remember again, however, that the situation in question involved a decent number of college-educated individuals who had time to ponder the million-dollar assertion. Yet they were sloppy.

In truth, the math incident well epitomizes the problem with mainstream (left-wing) media and leftists in general. Not only do they often deceive others and even more often deceive themselves, but, they’re lacking in virtue (good moral habits). Relevant here is the virtue of diligence, which, of course, corresponds to conscientiousness and meticulousness.

For example, since Rivas knows she’s “bad at math,” diligence would have compelled her to run her numbers through a calculator before tweeting her assertion. It takes just a minute of effort. Then there are all the other people involved who could have figured the math in their heads, but apparently didn’t care enough to do so.

Delving deeper, this reflects the relativism infecting moderns in general and the Left in particular. Since they don’t believe in Truth (absolute and universal by definition), it follows that they may not place a premium on seeking it — in big or little things. Thus, with objective reality not figuring prominently in their thinking and everything being relative, they start to make everything relative to themselves, to their emotions especially. Hence the leftist credo, “If it feels good, do it.”

This emotion-driven orientation is apparent in Rivas’s statement, “I feel like a $1 million check would be life-changing for people,” (emphasis added). What, though, does she think? Or does she?

This was also reflected when Representative Alexandria Ocasio-Cortez’s offered a justification of her own “fuzzy math” in 2019: She diminished the importance of being “factually” correct.

Then there’s the obvious disregard for Truth reflected in Williams’s ego-driven, flat-out lie about a 2003 mission in Iraq, a fib causing him to be demoted at NBC.

In a nutshell, the new-math journalists got caught up in a “narrative” that felt right, and the facts got overshadowed.

But Gay has experience with this. Pushing the impeachment hoax earlier this year, she likened the defenses of President Trump to Jim Crow justifications, said we were in a “scary moment,” and that there’s a “total collapse of faith in American institutions.”

There certainly is, and if Gay wants to know why, she need only look in the mirror.

A Brokered Dem Convention Could Be Coming. If So, Who Would Be Chosen?