“Blood on His Hands”: Cuomo Chose to Decide, and Nursing Home Elderly Died

“Cuomo has blood on his hands,” said the Queens nursing home executive. “He really does.”

There were many unknowns and disagreements early on in the Wuhan coronavirus pandemic, involving matters ranging from the disease’s contagiousness to its actual mortality rate to whether it was seasonal. But one thing everyone knew, from the beginning, was that it was highly dangerous to the elderly.

Governor Andrew Cuomo of New York certainly knew. In mid-March already, he issued the executive order “Matilda’s Law,” which placed great restrictions on people over 70 and those visiting them (e.g., you should be screened for temperature when seeing an elderly relative) and threatened individual fines up to $5,000 to enforce compliance. So Cuomo was serious.

He wanted you to know it, too. “My mother is not expendable. Your mother is not expendable,” he scolded March 24, rebuking those warning that lockdowns would kill more than they’d save. Given this, you’d think the last thing anyone would do — and the last thing Cuomo in particular would do — is put Wuhan virus-infected patients in nursing homes. So what did Cuomo do?

The very next day he issued an order (below) forcing nursing homes to accept Wuhan virus-infected patients.

In fact, he threatened the homes with decertification if they didn’t comply, according to American Thinker.

Here is the death sentence signed by the Lord High Executioner. Remember the “death panels” ridiculed by the clowns at CNN et al? This is a little preview of “national health” run by crooked Democrats… https://twitter.com/jackposobiec/status/1259654554985127936 … 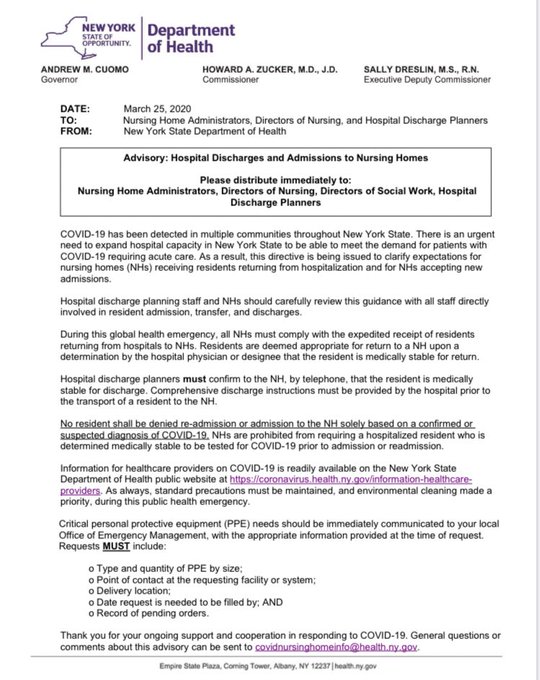 13.2K people are talking about this

In other words, Cuomo’s mother may not be expendable, but yours is a different story. For Cuomo chose to decide, and thousands of mothers died.

Now we know why a Queens nursing home executive stated in late April, “Cuomo has blood on his hands. He really does.”

Ironically, this is precisely what Cuomo’s leftist allies said, projecting all the way, about President Trump. Yet Trump wasn’t the one who forbade nursing homes from asking “incoming patients if they were coming back ‘stabilized’ from the coronavirus units,” as American Thinker relates it.

Nor was he the one who sent the aforementioned Queens nursing home body bags along with the Wuhan virus-infected patients — weekly.

Yeah, Cuomo’s health department did those things, too, reported the New York Post.

Note that the aforementioned Queens nursing home (kept anonymous by the Post for fear of retaliation) was Wuhan virus-free until Cuomo’s deadly order. Afterwards, residents started “dropping like flies,” said the executive.

“Why in the world would you be sending coronavirus patients to a nursing home, where the most vulnerable population to this disease resides?” the Post relates him as asking.

But Cuomo’s not answering. As American Thinker writes today:

Cuomo, the one who spoke of Trump’s hands being bloodied, sleazily denied any knowledge of this horrible, lethal decision, and even argued that protecting nursing homes was “not our job.” He mendaciously told critics elsewhere that his forcings were consistent with CDC guidelines. He threatened nursing homes with de-certification if they ‘couldn’t protect’ the resident patients being shoved in with newly arriving COVID-19 patients. His creepy spokesman called the outcry nothing but the nursing homes’ bid to deflect blame from “their own failures.” He continually dodged blame for the outrageous decision, which left more than 5,000 nursing home patients dead.

And for good measure he threw in that the whole problem was a matter of greedy capitalist nursing home seeking to get that extra paying patient, as if losing a whole lot of other paying patients — to death — never figured in their calculations as if that were the case.

It was complete garbage. Now the smoking-gun documents are out [the above tweet], showing that yes, it was Cuomo who ordered the COVID-19 patients into the nursing homes because [of] political correctness.

While the competition is stiff, Cuomo is competing with Gretchen Whitmer (D-Mich.) and Janet Mills (D-Maine) for the Worst Governor in the Nation title, as judged by Wuhan flu response. Why, just two days ago he was dubbed “Stay-at-home Serial Killer Andrew Cuomo” after registering shock upon learning that 66 percent of new Wuhan virus hospitalizations involved people largely sheltering at home.

In other words, he was surprised that his government-imposed lockdown was perhaps counterproductive. Thus, not only have his disastrous decisions caused greater direct Wuhan flu mortality, but his imprudence, ignorance, and ignoring of science will almost undoubtedly lead to more lockdown-induced destruction and death. (Studies increasingly find that lockdowns don’t save lives and have devastating consequences.)

Even more insufferably, Cuomo has been the most preachy, supercilious, self-righteous figure during the virus fiasco. Just consider the late April press conference clip below in which he chastises anti-lockdown, pro-freedom people, saying, “It’s not all about you” and that “you’re now responsible for my life.”

It’s unreasonable to assume Cuomo wanted anyone to die. But neither does the physician who shows himself incompetent. Yet if that doctor’s malpractice costs even one life, his career can be over and his future ruined.

What should be the consequence for a governor whose bad health decisions cost thousands of lives?

Not long ago COVID-19 Cuomo was touted as presidential timber. But with the bad fruit he has consistently offered, perhaps the Wuhan flu fiasco actually demonstrates that it’s high time his political career was felled.

TikTok Watching and Learning: Beware of the Chinese Trojan App