Turkish president Recep Tayyip Erdogan, who has warned of a war between Islam and Christianity and called Europe a “sick man,” is currently making it a bit sicker: In accordance with a longstanding threat, he’s allowing Muslim migrants unimpeded access to the continent for 72 hours.

As Breitbart informed Thursday, “A senior official has claimed that the government of Turkish President … Erdogan has opened the borders for Syrian asylum seekers and other migrants and will not prevent anyone from heading to Europe by land or by sea, Reuters reports.”

“According to the news service, all Turkish border and police officials have been ordered by the government to stand down along with members of the Turkish coastguard,” the site continues. “The move comes after the Turkish government claims to expect a wave of migrants after around one million people were displaced in Idlib [Syria].”

Much as North Korea does with nuclear saber rattling, Erdogan has long used migrant-wave threats as a cudgel to extract concessions from the European Union. For his part, though, the Turkish president claims his nation is overwhelmed and under-aided. As NBC Los Angeles reports:

“We can’t handle a new wave of migration,” Erdogan said Saturday, in an apparent reference to the growing humanitarian crisis in Idlib. Nearly 950,000 displaced civilians have been pushed toward the Syrian-Turkish border amid cold winter weather.

Erdogan said Turkey would not stand in the way of refugees and migrants already in the country who hope to head to Europe.

“We will not close the gates to refugees,” he said. “The European Union has to keep its promises. We are not obliged to look after and feed so many refugees.”

Under a 6 billion euro deal in 2016, Turkey agreed to stem the tide of refugees to Europe in return for financial aid after more than a million people entered Europe in 2015. It has since accused the EU of failing to honor the agreement. Erdogan has frequently threatened to “open the gates” and allow refugees and migrants to head to Europe unless more international support was provided.

Money motives aside, Turkey certainly has its hands full, currently being involved in an escalating military conflict in Syria. As for background, the BBC writes that “Syrian government forces, supported by Russia, have been trying to retake Idlib from jihadist groups and Turkish-backed rebel factions.”

Idlib, in northern Syria, is the last of the nation’s provinces “where Syrian rebel groups still control significant territory,” the site continues.

You can watch the below video, which provides more background, as depicted by Belgian international relations professor Dr. David Criekemans. But the most recent developments are that Turkish troops were killed in an attack last week, and now Ankara has retaliated by shooting down two Syrian planes and striking other Syrian targets.

War often does create humanitarian crises, of course. Yet there are many reasons to be wary of Muslim migration into Europe, which has in the recent past led to cultural disruption, strains on social services, and crime.

Many of these reasons were outlined by Dr. Mudar Zahran, a Jordanian Opposition Coalition leader and orthodox Muslim currently living as an asylee in Britain. In a television interview during the wave migration crisis of 2015, he made the following assertions:

• Contrary to how the event was billed by immigrationists, Europe was experiencing not just Syrian migration but an “influx of all kinds of refugees from the Middle East,” as Zahran put it.

• The actual Syrian migrants were coming mainly from safe areas; the ones in danger zones couldn’t escape.

• Motivated by economics, the migrants were leaving safe havens in places such as Turkey and Jordan and then bypassing poor European countries in favor of Germany, which offers generous welfare benefits.

• Muslim terrorists have entered Europe via the “humanitarian” migrations; Zahran said that he had the names and photos of such miscreants.

• There is in reality of problem whereby Muslims don’t assimilate into European culture.

• Arab newspapers and magazines were openly trumpeting how the migration would facilitate the conquest of Europe (video below).

Of course, it’s entirely possible that the current migration’s nature is different. But would you bet your life on it? How about your culture?

Moreover, some basic questions here go unasked. Why is pressure never put on wealthy, sparsely populated Arab countries such as Saudi Arabia, Qatar, Dubai, and the UAE to accept their fellow Arab co-religionists? Why is the onus always put on Europe? Does the slang term “being played” come to mind here?

Second, the spirit of refugee status is that the endangered are granted safe haven until the threat in their native land has passed and they can be repatriated. Zahran alluded to this, saying that he was “completely against making this situation permanent.” Yet permanent resettlement is now the default Western pseudo-elite position, with citizenship and voting rights lying down the road (and guess who Third World migrants generally vote for?). So again, does it seem as if maybe there’s an agenda here?

The good news is that Greece is apparently impeding the migrants’ passage. This reflects the increasing European opposition to immigrationism, as best epitomized by immigration-realist EU nations Hungary and Poland. In fact, Polish Member of the European Parliament Dominik Tarczyński just tweeted out the montage below, in which he shows the faint-hearted how to combat immigrationist designs.

It’s as simple as that! 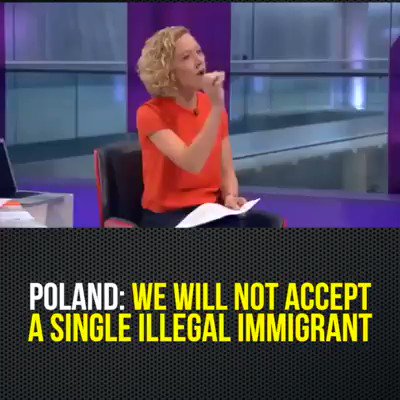 16.3K people are talking about this

This pushback certainly can’t please Erdogan. Overseeing a nation that was the last great Muslim caliphate (the Ottoman Empire) — which critics believe he seeks to restore — he’s quite the fan of demographic jihad, having in 2017 told Turks living in Europe to have “five children, not three. You are Europe’s future.” But it surely will please Dr. Zahran. He has said that the Muslim migrants should be kept out of Europe and called their large-scale entry “the soft Islamic conquest of the West.”

Of course, there can’t be a soft conquest without what enables it: soft Western heads masquerading as soft hearts.

Skeptics Bring Science to UN; Democrats and Alarmists Ignore It