AOC: “No One Ever Makes a Billion Dollars” — Billionaires Steal It

Alexandria Ocasio-Cortez, the economics major who once said that “unemployment is low because everyone has two jobs,” used this past Martin Luther King, Jr. Day to attack the rich. Perhaps believing that a person is not judged by the content of his character but the corpulence of his wallet, she said in an interview with author Ta-Nehisi Coates, “No one ever makes a billion dollars. You take a billion dollars.”

She also echoed Barack Obama’s notorious 2012 remark about businessmen, “You didn’t build that. Somebody else made that happen.”

Speaking at the Monday event “Blackout for Human Rights: MLK Now 2020” at Riverside Church in Manhattan, the New York congresswoman said, evoking applause, “No one ever makes a billion dollars. You take a billion dollars,” Fox Business reports. ”I’m not here to villainize and to say billionaires are inherently morally corrupt…. It’s to say that this system that we live in, life in capitalism always ends in billionaires.”

Ocasio-Cortez also said that “billionaires make their money ‘off the backs’ of ‘undocumented people,’ ‘black and brown people being paid under a living wage’ and ‘single mothers,’” Fox continues.

Then, after interviewer Coates posed the hypothetical of a billionaire producing widgets and believing he deserves his wealth, the avowed socialist replied as the tweet below relates (longer answer in embedded video):

AOC on why successful businessmen don’t deserve their wealth: “You didn’t make those widgets! You sat on a couch while thousands of people were paid modern day slave wages, and in some cases real modern-day slavery; you made that money off the backs of undocumented people …” 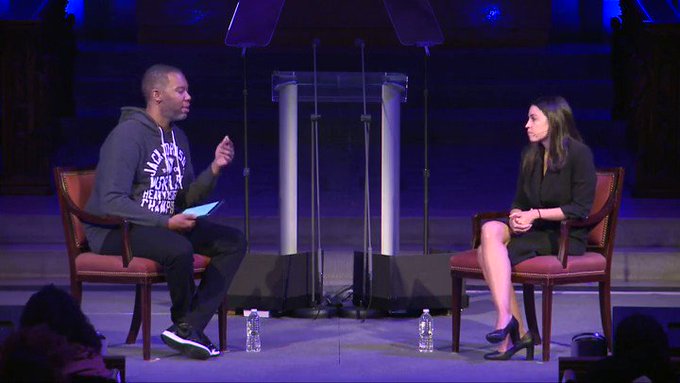 1,042 people are talking about this

Reparations advocate Coates nodded along as if Ocasio-Cortez’ answer was the pinnacle of profundity.

Fox also points out that the congresswoman “joined in on presidential candidate Sen. Elizabeth Warren’s criticism of JPMorgan Chase CEO Jamie Dimon in November” with the following tweet:

Y’all, the billionaires are asking for a safe space – you know, in addition to the entire US economy and political lobbying industry. https://twitter.com/business/status/1191886520732602369 …

24.5K people are talking about this

Interestingly, redistributionists always seem to draw it somewhere above their own net worth. For example, socialist Bernie Sanders rails against billionaires but not millionaires — he happens to be one of the latter.

Yet there’s a deeper question here: If these Daddy Warbuckses didn’t make a billion, did they even make one dollar?

That is, is there a reason to question any of their wealth if their earning methods are just and valid? If they’re not, however, it follows that even their first dollar was dishonestly obtained and undeserved. We don’t say a bank robber is involved in legitimate wealth creation as long as he steals below a certain amount, after all.

Of course, if a billionaire’s entire fortune is undeserved, then the government actually has a pretext for seizing all of it, doesn’t it? Moreover, what should befall someone who has stolen on that grand scale?

Now we know why Sanders campaign staffers have said that billionaires should be put in gulags. They’re just taking Ocasio-Cortez’ thinking to its logical conclusion and adding consequences.

Again, though, since it’s unclear where the line is drawn (“billionaires” is arbitrary), who else is gulag-worthy? The only logical answer and the only one consistent with socialism is: anyone pursuing “capitalism” and opposing the socialist revolution. Hence socialism’s cold body-production history.

This said, Ocasio-Cortez could counter that billionaires should be compensated for their endeavors, but at a lower rate. But what’s the formula? A socialist model? If, for example, a factory’s creator gets compensated for the hours he devotes to work at the same rate as his employees, why create a factory? Why not just be an employee?

Okay, so then we reward him more handsomely, factoring in his intellectual capital (ideas), ambition, diligence, etc. At what rate? And if we cap his total allowed net worth at, let’s say, $500 million, why should he at that point assume the risk of further expanding his business — e.g., building new factories, which creates more jobs and wealth? Why shouldn’t he just kick back on a beach somewhere?

Obviously, someone has to make these determinations, and insofar as it’s not going to be the market, it’ll be the government. In other words, it’s economic democracy vs. economic autocracy.

Realize that economic freedom (the term “capitalism” was originated by socialists) — “market” action — is merely democracy applied to economics. Millions of people decide what products will be available, which will be most popular, and to what extent various individuals will be compensated. They do this based on their “votes,” which they cast daily when they choose some products and services over others.

The alternative is economic autocracy, wherein an oligarchy comprising pseudo-elites (or an individual) such as Ocasio-Cortez makes these decisions. Is this preferable? The USSR with its food lines and privation illustrated how it works out.

Lest I be misunderstood, none of this means I have any special love for the mega-rich. I actually agree with G.K. Chesterton, that such people “are egotistic, secretive, dry as old bones. To be smart enough to get all that money you must be dull enough to want it.”

But I also know that, to paraphrase a line about governmental democracy Winston Churchill popularized, economic democracy is “absolutely the worst system in the world — except for all the rest.” Sure, it has given us rap music, Gucci soy boy wear, and reality TV. Then again, representative government has given us Ocasio-Cortez, Adam Schiff, and Nancy Pelosi, and we’re not talking about scrapping that.

I also know that every civilization has people who control most of the wealth (and perhaps do an inordinate amount of couch-sitting). It’s just a question of who it’ll be, those who can create the wealth (entrepreneurs) or those who can only steal it (rulers). We already know which category Ocasio-Cortez is in and what her choice is.

Socialism: For Your Benefit — or Theirs?

WikiLeaks: Evidence That Syria Did Not Use Chemical Weapons Was Repressed